INHERENT LUST AND THE CONTROVERSIAL NATURE OF OVERPOPULATION 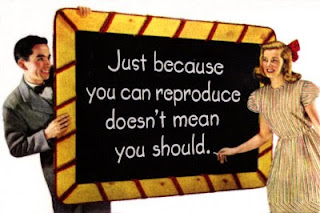 The principle argument that would be made by worshippers of the blind but sacrosanct womb against the charge of overpopulation is that it is a purely subjective judgement and cannot be held to be valid under the norms of social and demographic studies. These studies can and do refer to areas of high population density, of course, but are unable to take the essential step required for sane and honest acknowledgement.

It must be pointed out that, without the so-called 'subjective' view, nothing at all could even be asserted as existing, let alone comprehensive social and democratic studies. To pretend that the subjective view is invalid and inappropriate is a further example of the deep dishonesty that pervades human experience and behaviour.

Clearly, the root of such dishonesty is to be found in the unspeakable, wonkybonky hotbeds of lust, that is, in the irresistible urge of people to reproduce (with apologies to those of other lust faiths) just like the rest of nature. It's perfectly natural to go on reproducing regardless of circumstances because that's what all other organisms do— and they are all out to dominate the scene if they can. Some of the smallest, to-us pathogenic organisms, for instance, are getting into their stride now that we're having difficulty combating them effectively. There's no chance of looking forward to a disease-free future; that would be the pipe dream of the ravenous womb—if it could smoke!

Let us know should you be unhappy with the conclusion that it's perfectly natural to reproduce beyond the limits that intelligence would suggest or if you spot a flaw in the argument.

For an exceptionally forthright explanation of how women are unwittingly destroying the high civilisation of 'the West,'  and laying it open to invasion by hostile hordes from the Middle East and Africa, be sure not to miss this video— https://www.youtube.com/watch?v=UxpVwBzFAkw