I have failed to find a mention on your website of the late Jack Parsons, who lobbied the BBC for forty years in the hope of getting them interested in the obvious: gross overpopulation, a subject still generally taboo in society. I hear that he was called ‘mad’ even by his own family members. (The Treason of the BBC by Jack Parsons 2006). He called his own effort ‘Optimum Population Trust - OPT.' 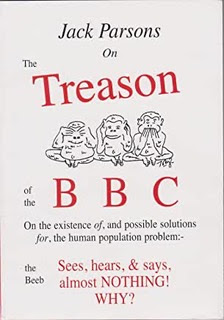 Though an optimal level of population is perhaps a little too optimistic an idea, Jack had a very cogent point: popular crowd demonstrations about the danger of too many people or overpopulation (OP) will most probably be merely absorbed into all the other demos that rage about a variety of grievances with which the public are becoming all too familiar, and that
Only a responsible broadcasting service can bring the essential and plainly obvious message home to the people. The sanctity of motherhood cannot be maintained for much longer; eventually the frustration and fury of the assumptively reproducing female will have to be faced up. This sounds dramatic, but the basis of reproductive activity is drama.
So far, the BBC cannot be regarded as a responsible broadcasting service, nevertheless that is where effective pressure needs to be applied. The public are well aware of OP - they have to deal with it every day and COVID-19—or whatever new name it will have acquired—and other recent contagious diseases in addition to natural disasters are potent hints from nature that mankind has gone too far.
What is required is the thing mankind finds the most difficult to do: acknowledge. Acknowledgement, in full, without quibble, is perhaps the only way to make a start with the business of trying to establish a proper balance of man and nature.
Population Matters is obviously trying to make itself popular, but this is oxymoronic since criticism of blind reproduction is highly unpopular!
What exactly is needed? Sheer courage and determination for those with what may be call a true overview, i.e., a view that correctly and comprehensively embraces the global situation of man versus nature, a view that see the situation as it is.
If you have time, you might glance at my website, which touches on OP and its associated issues.
With best wishes,
WING

PS I am lately informed that Population Matters was formerly known as The Optimum Population Trust. Since its inception, its policies have grown ever weaker as it seems to have decided that the only way to reach the public at large is to express population matters in a way that won't upset them. Similarly, the only way for a royal house to rule 'in this day and age' is to show that its members are really more or less as common as everyone else.